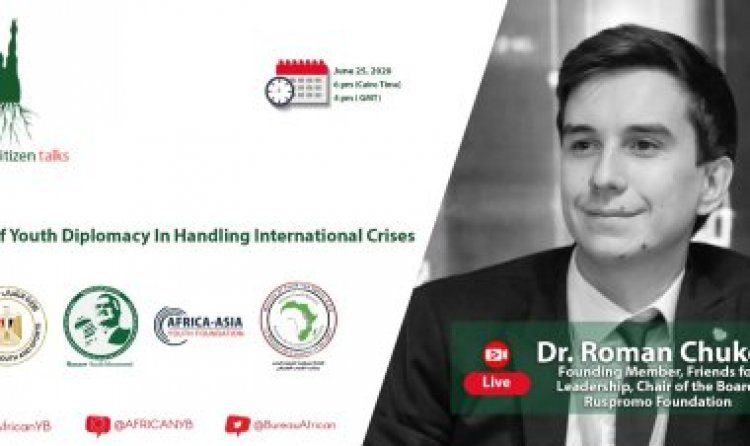 The episode sheds light on youth diplomacy, its role during international crises and the main challenges, especially at the time of the emerging corona virus pandemic.

The seminar hosted one of Russia's most prominent activists, Dr. Roman Shikov, a founding member of Friends of Leadership, an international network of next generation leaders and social entrepreneurs to share best practices. He is also the Chairman of the Board of Directors of the Russian Center for the Promotion of International Initiatives (Ruspromo Foundation).

Speaking about youth diplomacy, Dr. Roman Shekov said, “There are means and mechanisms for young people to interact with each other, whether at the bilateral or multilateral level. Any regional or international organizations, such as the European Union, the African Union or the United Nations, include a dialogue for young people that can be a supporting method for Youth Diplomacy."

The episode witnessed a great interaction from the audience, as many questions and inquiries related to the topic of the episode were received, and answered.

It is noteworthy that the guest list of the Global Citizen Program includes a number of decision-makers and youth leaders from different countries of the world and in various fields, with the aim of transmitting positive messages to the world's youth to create a link between youth and decision-makers.

Amira Sayed, a journalist with the Egyptian Gazette, moderates the program’s episodes, which is the first English-language newspaper in the Middle East. In addition to being Egypt’s representative in the World Youth Parliament for Water, she participated in covering many international events inside and outside Egypt.

The 60th anniversary of the independence of the Republic of Rwanda