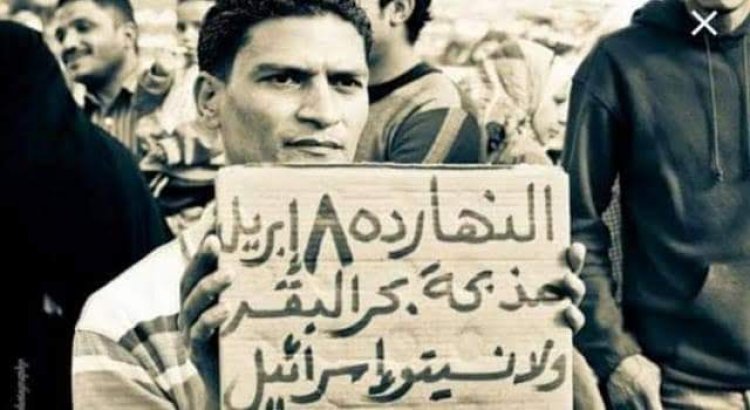 On the morning of Wednesday, April 8, 1970, during the War of Attrition waged by Egypt against the Israeli entity, 5 Israeli "Phantom" planes raided - for more than 10 continuous minutes - the Bahr el-Baqar primary school at El Husseiniya in Sharqia Governorate. Five bombs (weighing 1,000 pounds) and two air-to-ground missiles struck the school, killing about 30 children and wounding dozens of children and school personnel, and the school building was completely demolished.

Israel claimed that its fighters were targeting military bases, that the Bahr el-Baqar primary school was a hidden military barrack, and that the presence of children in the school was merely a “camouflage”. Egypt condemned this crime and sent an official memo to the United Nations in which it requested an urgent meeting of member states. The Egyptian Foreign Minister held an expanded meeting of the foreign ambassadors to Egypt. The crime aroused international indignation, and it was described as a dehumanizing act. The Soviet Union expressed its strong condemnation of this crime, stating: “When Israel wanted to exercise its right to react, it did not fight an army, but went to avenge the children of the Bahr el-Baqar primary school.” The Soviet Union also described the attack as an “impotent response”.

The Egyptian cinema depicted the massacre through many films, most notably the movie “Al omr lahza” 1878 (translated to Life is a moment), and “Hekayat Ghareeb” 1992 (translated to Stories of a stranger). The Egyptian poet Salah Jaheen documented this crime in a poem entitled “El Dars entaha” (translated to The lesson is over)

“What do you think of blood stains?

O conscience of the world, my dear

It belongs to an Egyptian brown girl

She was one of my star students” Lines from Sala Jaheen’s poem.

Nkrumah ... the leader who loved an Egyptian woman

Anniversary of Nakba, The Deep Wound of Palestine and Nasser's...